Where Your Next Best Friend Is Waiting

The noble and protective breed.

About the Cane Corso

At nearly 28 inches at the shoulder and often weighing more than 100 pounds, with a large head, alert expression, and muscles rippling beneath their short, stiff coat, Corsi are at a glance intimidating creatures. Their imposing appearance is their first line of defense against intruders. As one writer put it, “An understated air of cool competence, the kind of demeanor you’d expect from a professional bodyguard, is the breed’s trademark.”

Corsi are intelligent, loyal, eager to please, versatile, and intensely loyal to their humans, but are also assertive and willful, and can end up owning an unwitting owner. As with any other big guardian dog, responsible breeding and early socialization with people and other dogs is vital.

The Cane Corso (KAH-neh-KOR-soh; plural: Cani Corsi) belongs to a subcategory of working breeds called mollosus dogs, or mollosers, named for the Molossi, an ancient Greek tribe thought to have bred giant, big-boned guardian dogs of Mastiff type. At the height of the Roman Empire’s power, the legions that subdued and occupied the Greek islands brought mollosers back to Italy and bred them to native Italian breeds.

The offspring produced by these crosses were ancestors of the modern Corso and it’s larger relative, the Neapolitan Mastiff. The original Corsi were used as dogs of conquest who earned their stripes as “pireferi,” fearless dogs who charged enemy lines with buckets of flaming oil strapped to their backs. It is supposed that these early Corsi were bigger, more lumbering dogs than today’s sleeker version, which moves with a catlike grace.

With the dissolution of the Western Empire in the fifth century, Italy’s legions and their dogs were out of work. Corsi adapted to such civilian jobs as wild boar hunting, farming, livestock droving, and most famously, guarding farmsteads and henhouses. The Corso was for centuries a familiar sight on the farms and pastures dotting the Italian countryside. But the effects of constant invasions of the Italian peninsula and Sicily, economic and political upheavals, and mechanized farming conspired to reduce the Corso population to precariously low numbers. By the mid-20th century, the breed was all but extinct.

Specimens did survive, however, in Italy’s back country. In the 1970s, a group of Italian fanciers banded together to revive the breed of their rustic ancestors. The Society Amorati Cane Corso (Society of Cane Corso Lovers) was formed in 1983, and by the following decade Corsi were being exhibited in European dog shows. The first Corso import arrived in America in 1988, and in 2010 the breed was recognized by the AKC.

This working breed needs plenty of physical activity to stay in shape. Plan on taking him for a brisk walk or jog of at least a mile, morning and evening, every day. If you like to bicycle, get an attachment that will allow him to run alongside you. Go easy on puppies. Their musculoskeletal system isn’t fully developed until they are about 18 months old, so while they need more walks to help burn off their puppy energy, those walks should be shorter and slower. For mental stimulation, provide this dog with a job. Good employment for a Corso includes herding livestock (your own or a trainer’s), learning tricks, practicing obedience skills, or being involved in a dog sport. Spend at least 20 minutes a day on these types of activities. It’s okay to break it up: for instance, 10 minutes in the morning and 10 minutes in the evening. Never allow a Corso to run loose. A solid, secure fence is a must. An electronic fence will not prevent him from leaving your property if he chooses to, and it won’t protect your neighbor’s dog or cat if he wanders into your yard. Finally, be prepared for the amount of care and large bills that can go along with owning a large dog. There’s more poop to scoop, and essentials such as spay/neuter surgery are more expensive for big dogs than for small ones. If your Corso needs surgery for any other reason, the cost of anesthesia will be high because he needs more of it than a small dog, as well as larger amounts of pain medication after surgery. Finally, there are the costs of training class, entry fees for dog sports, and pet-sitting or boarding when you are away from home. Take all of these expenses into consideration before acquiring a Corso because you will be facing them for 10 + years.

Children And Other Pets

When he is properly raised, trained, and socialized, the Corso can be loving toward and protective of children. It’s important, however, that puppies and adult dogs not be given any opportunity to chase children and that kids avoid making high-pitched sounds in his presence. Running and squealing may cause the Corso to associate children with prey. Keep him confined when kids are running around outdoors and making lots of noise, especially if your children have friends over. The Corso may think it necessary to step in and protect “his” kids, and that is unlikely to end well. Games of fetch or — for young children — helping to hold the leash are good ways for children to interact with a Cane Corso puppy or adult. As with every breed, you should always teach children how to approach and touch dogs, and always supervise any interactions between dogs and young children to prevent any biting or ear or tail pulling on the part of either party. Teach your child never to approach any dog while he’s eating or sleeping or to try to take the dog’s food away. No dog, no matter how loving, should ever be left unsupervised with a child. The Corso may get along with other dogs or cats if he is raised with them, but he will likely view strange animals as prey and do his best to kill them. It’s essential to be able to protect neighbors’ pets from him. This is another instance in which socialization is a must. Your Cane Corso should learn from an early age to remain calm in the presence of other dogs. If you do get a second dog, either another Cane Corso or a different breed, it is best to choose one of the opposite sex. 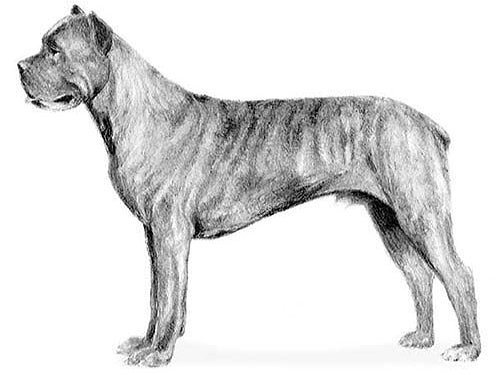 Ancient Italian breed medium-large size Molossus Dog. Sturdy, with a strong skeleton. Muscular and athletic, it moves with considerable ease and elegance. It has always been a property watchdog and hunter of difficult game such as the wild boar.

Molossus, large, its total length reaches approximately one third of the height at the withers. Planes of the skull and muzzle are slightly convergent; they are not parallel. The circumference of the head measured at the cheekbones is more than twice the total length of the head; skin is firm and smooth. Skull – Viewed from the front, skull is wide and slightly curved; width is equal to the length. From the side, a prominent arch begins above the eyes and then flattens backward toward the occiput. Viewed from the top, it has a square appearance due to the zygomatic arches and powerful muscles swathing it. Stop – Well-defined due to developed and bulging frontal sinuses and prominent arch above the eyes.

Neck-Slightly arched, flowing smoothly into the shoulders with a small amount of dewlap. The length of the neck is approximately one third the height at the withers. Body – Depth of the ribcage is equal to half the total height of the dog, descending slightly below the elbow. Ribs are long and well sprung. Moderate tuck up. Chest – Broad, well-muscled, strong forefront. Back – Wide, strong, muscular. Highest part of shoulder blade slightly rising above the strong, level back. Loin – Well-muscled, and harmoniously joined to the back. Croup – Long, wide, slightly sloping. Rump should be quite round due to muscling.

Strong and muscular, well-proportioned to the size of the dog. Straight when viewed from the front or side; height of the limb at the elbow is equal to 50 percent of the height at the withers. Shoulders- Muscular, laid back. Upper arms – Strongly muscled, with good bone, powerful. Elbows – Held parallel to the ribcage, turning neither in nor out. Forelegs – Straight and with good bone, well muscled. Pasterns – Almost straight, strong but flexible. Feet – Round with well-arched toes (catlike). Lean, hard, dark pads and nails, except in the case of white toes. Front dewclaws – Can remain or be removed, if left intact should only be a single dewclaw on each leg.

As a whole, they are powerful and strong, in harmony with the forequarters. Straight when viewed from the rear or front. Thighs – Long, wide, angulated and well-muscled. Stifle – Should be moderately angulated, strong. Legs – Strong bone and muscle structure. Hocks – Wide set, thick and clean, let down and parallel when viewed from behind. Rear pastern – straight and parallel. Rear dewclaws – Any rear dewclaws are removed. Hind feet – Slightly more oval-shaped and less-arched toes.

The coat is short, stiff, shiny, adherent and dense with a light undercoat that becomes thicker in cold weather.