Where Your Next Best Friend Is Waiting

The calm yet confident breed. 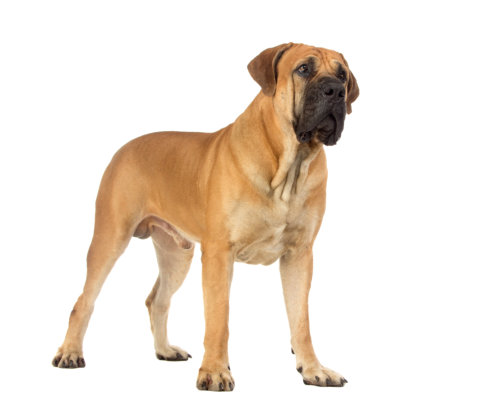 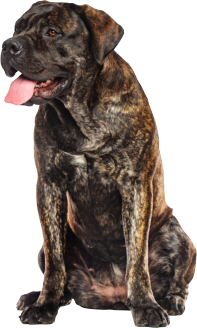 There’s a no-frills, no-nonsense quality to this sleek-coated avenger, who might stand as high as 27 inches at the shoulder and weigh as much as you do. A broad and blocky head, powerful jaws, and thick muscles from neck to rump mark it as a descendant of the ancient “molloser” dog family, the foundation of today’s mastiff-type breeds. In motion, the Boerboel just might be the most agile of all mastiff types.

The imposing Boerboel is devoted to protecting the people and places he loves. Training and socialization should begin early, before a pup becomes a dominant adult. This is a trainable, versatile breed, eager to spend time with their adored humans. Still, a Boerboel might be way too much dog for the novice owner to handle.

“Boer,” a Dutch word meaning “farmer,” was the name given to Dutch, German, and Huguenot settlers of South Africa who began arriving in the mid-1600s. To protect their remote homesteads from predators, they brought along large guarding dogs; bull types and mastiff types among them. The interbreeding of these and other European bloodlines in South Africa resulted in something called the Boer Dog, which was used by Boer settlers as a big-game hunter and protector.

Further refinements eventually gave rise to the Boerboel (“farmer’s dog”), a fearless mastiff who specialized in the protection of the hearth and home. Their agility and prodigious strength came in handy when running off or tangling with ferocious wildlife, whether lions or packs of marauding baboons.

One should not conclude from this that the Boerboel was a snarly brute constantly spoiling for a fight. Because the breed was created to be primarily a protector of the family, Boerboels had to be sensitive and smart enough to tell a friend from a foe and to take its cues from those they protect. A Boerboel has never been known to back down when provoked, but their default mode is generally stately watchfulness. Boerboels can be powerful enough to excel at competitive weight-pulling, but they have also had success as docile therapy dogs who have a soft spot in their huge hearts for children.

The Boerboel was admitted to the AKC Working Group on January 1, 2015. 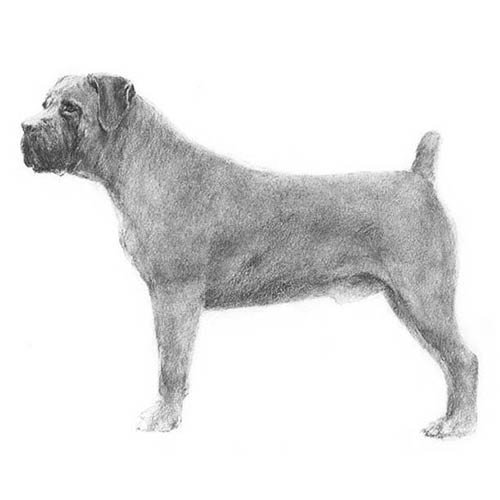 Historically the Boerboel developed as a general farm dog for the pioneers who settled in South Africa since the seventeenth century. These dogs were often the first line of defense against predators and were valuable in tracking and holding down wounded game. Old farmers told many a tale of the strength, agility and courage of the Boerboel. The dangers and harsh conditions of southern Africa allowed only the fittest to survive. The protective character of the Boerboel is today still evident and is much sought after, as is the calm, stable and confident composure of the breed. The origin and purpose of the Boerboel should be understood in order to preserve the unique identity and qualities of the breed as a South African developed mastiff. Type, conformation, functional efficiency and mentality are equally important in the evaluation of the Boerboel as a whole. The Boerboel is a large dog that is strong, confident and muscular in appearance with powerful, free-flowing movement. When observing a Boerboel at play or work, standing or moving, it should show strength, suppleness, nimbleness and agility.

The head is an impressive and a distinctive feature of the Boerboel. It should be blocky, broad, deep, square and muscular, with well filled cheeks and in proportion to the body. Moderate wrinkling is observed over the forehead when the dog shows interest.

The neck is powerful, of medium length, and forms a muscular arch. It flows smoothly into the sloping shoulders, gradually increasing in width from the head to the shoulders. (In the female the muscles are less accentuated but should remain in balance with the head and body). The dewlap is noticeable but disappears towards the sternum.
The topline is firm and level, extending in a straight line from behind the withers to the croup. The back remains horizontal to the ground while the dog is moving or standing. The under line of a mature dog has a slight tuck-up.
The body is blocky, muscular and solid, with good depth and width. The back is broad and straight, with pronounced muscles. The ribcage is well sprung and well filled behind the shoulder blades. The transitions between the chest, loin and rump are well filled and flowing. The loin is strong and muscular, and only slightly narrower than the ribcage and rump. The croup is broad, flat and strong, with well defined musculature. Its height should not exceed the height at the shoulders.

The forelegs are strong boned, with well-defined muscles. Viewed from the side the forearm should be vertical from the elbow to the pastern. When viewed from the front they should be parallel to each other, not bowed or with toes turning inward. Elbows should be held close to the body. Length of the foreleg to the elbow is approximately 50 percent of the dog’s height at the shoulder. The chest is broad, deep and wide with well-sprung ribs and strong developed pectoral muscles. The shoulders are moderately sloping, powerful and muscular, with no tendency to looseness. The shoulder blade is long with moderate angulation. The upper arm is equal in both length and angulation to the shoulder blade. The pastern is short, thick and strong and with a slight slope when viewed from the side. The front feet point straight forward, are large, round, strongly boned and compact. The toes are well arched, with short, preferably black toenails and protected by hair in between. Front dewclaws may be removed. The pads are thick, tough and black.

The coat is short, dense, smooth and shiny. The skin is thick and loose but fits smoothly. Skin is well pigmented.

The hindquarter is sturdy and muscular. The hind legs are strong boned. The stifle should be sound, strong and moderately angulated and in balance with the forequarters, to support the powerful propulsion from the hindquarters during movement. The upper thighs are broad, deep and muscular as seen from the side and the rear. The lower thighs have well defined muscles and show substance down to the hocks. The metatarsus is broad, relatively short and perfectly upright. The hind feet point straight forward and are slightly larger than the front feet. Rear dewclaws, if any, are generally removed.